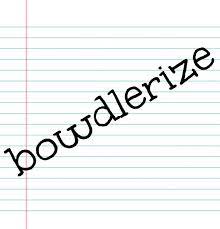 The term bowdlerize is a verb that refers to the action of editing and simplifying content to remove anything that is considered vulgar or offensive.

If you don’t want to immediately offend the audience during your speech, I would take time to bowdlerize the introduction.

After hours of discussion, the senators agreed to bowdlerize their proposal to get it passed and simply pushed it through without reading the fine print.

I considered the essay to be pretty tame and I could tell that the author spent time bowdlerizing the content before submission.

Bowdlerize comes from the Late Latin bōwdelāre, meaning 'to rewrite or edit to make something more appropriate or less offensive.' The suffix -izā was added to describe the resulting action or state. English speakers adopted the word bowdlerize into the language in the early 1800s.