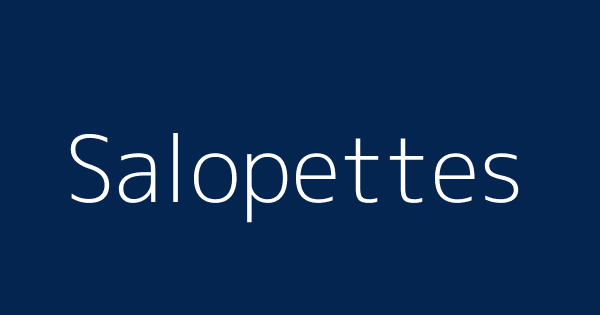 Definition: Salopettes, also known as overalls, are one-piece clothing items that have a front flap and either shoulder straps or a full sleeveless top attached to quilted trousers. They are typically used to add an extra layer of protection when participating in certain sports-related activities.

Etymology: Salopettes is actually the French word for bib-and-brace overalls and originates from the 1970s. Salopettes were originally meant to form part of a ski suit but now have become a bigger part of the fashion industry.

Salopettes can quickly become a regrettable clothing choice, especially if you´re going out to a restaurant or have been drinking a lot of water and have to make some trips to the bathroom.

It may be a good idea to wear a layer of salopettes if you intend on participating in certain sports-related activities, such as skiing, for an extra layer of protection.

If you´re going to work out in the yard, it may be a good idea to layer up with a pair of salopettes to protect your legs.